We live in a society where when you get older people want to push you aside for somebody younger because they believe that younger is better particularly when you are speaking about any industry where your looks and how fit you are very important. And this seems to happen more to women then to men and it is called ageism. It happens a lot in Hollywood where you see an actress who has always been a lead actress and then once she gets to 40 she is pushed down to being a supporting actress as opposed to a lead actor. That actress who has always been the lead now is getting pushed aside for the younger actress for that lead role she used to always hold.

The opportunities for being the lead and carrying a movie seems to minimize when the woman gets older which is so sad and this ageism discrimination has been going on for so many years. This also happens in the high fashion modeling industry where a woman that is older seems to get pushed over for the younger model even when that older model still looks great and youthful.  I have a good friend who has been a high fashion model for over 20 years and she is over 40 and she looks like she is still in her early 30’s.

She is still a working high fashion model but because of her chronological age she doesn’t reveal it when she goes to modeling auditions because she doesn’t want to be discriminated even though she still looks very young. Pretty sad that she has to conceal her age because if people find out her age they may give the modeling job to the younger model. She consistently competes against younger models all the time for jobs and does a very good job in beating them out for those jobs but she is very adamant about telling her agent not to reveal her age to the casting director for fear of discrimination against age.

Age discrimination in the modeling and entertainment industry affects women way more than men so they have to work harder to look as youthful and sexy as they can. The fitness industry is a very unique industry where I think it is getting better that you can be older and still have reasonable success in the industry. I have some women who ask me all the time I am 39 or I am 40; can I still succeed in the industry even though I am older and I say yes the reason is because the most current successful female fitness models are 35 years and older. Jamie Eason, Ava Cowan, Jennifer Nicole Lee and Alicia Marie are some of the most current  successful fitness models. They are the ones that are continuously gracing covers all over the world over the past 5 years and more and they don’t seem to be stopping anytime soon.

The best example of a female fitness model that is defying the laws of aging and really exemplifies that age is just a number is Kim Dolan Leto who is 42 years old. In 2011 she has had the best year out of any female cover model as she has graced over 11 fitness covers this year all over the world. She is very proud and public of her age and it seems to not hurt her at all when she mentions it in magazines and in interviews. She celebrates her age as opposed to concealing it which is incredibly admirable.  If you look at her pictures you can tell she is not the average 40 year old most people would say she looks like she is 28 to 32 years old. She has a better body now then she did 10 years old and she looks better now than she did 10 years ago. I do believe that 40 is the new 30 if you take good care of yourself and Kim is proving that.

With all the current information on diet, training and skin care for aging you really can slow the aging process. That’s why I believe that anybody that is over 40 during this generation will look younger than the 40 year old in the previous generation because of all the education we have now on slowing the aging process and looking younger. Any woman that is in the modeling industry or is a personal trainer should look at Kim Dolan Leto’s covers and gain motivation and inspiration that they can still be very successful in what they do and be over 40.

She does the fitness modeling thing part-time and like I said in 2011 at 42 years old she was the most published female fitness model in the world by far. Age is really just a number and if you take good care of yourself you can still stay the same age physically speaking. Hopefully within time the discrimination that women receive when they get older will get better because it still exists unfortunately particularly in the entertainment and modeling industry but I think when you see role model examples like Kim Dolan Leto and my good friend who still is doing very well in the high fashion modeling industry at over 40 that it gives hope that it is getting better and that you can still have a career as a model over 40. So I end this article by saying don’t let anybody tell you that you are too old to model or that you too old to be a personal trainer or that you are too old period. Age is really in the mind and how you feel. 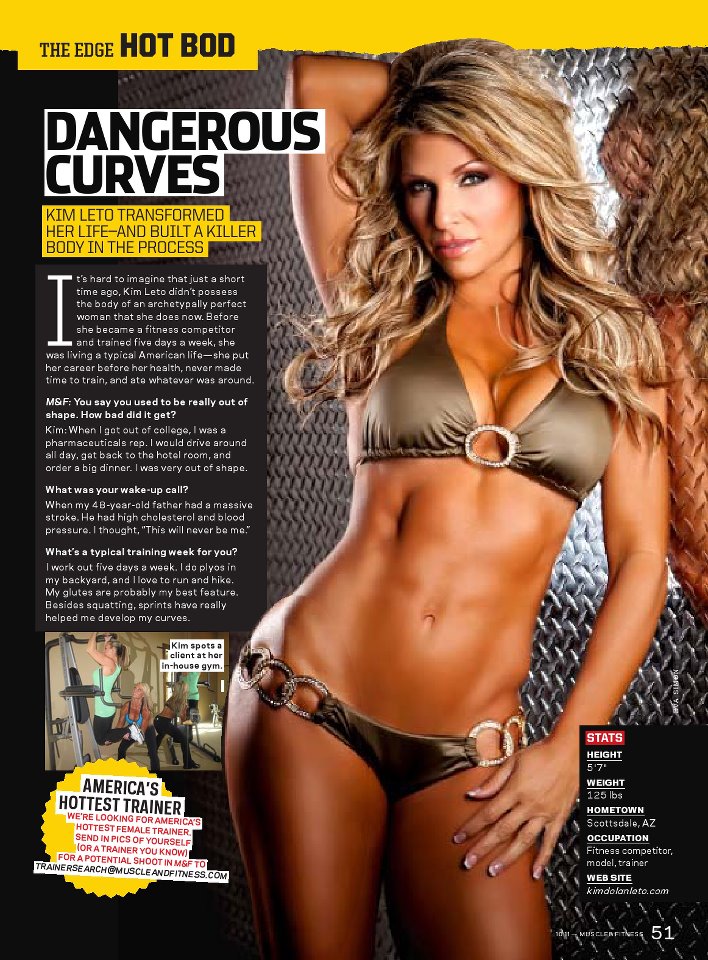 The #1 Influencer in Fitness& Health on Twitter Is Obi Obadike

The #1 Influencer in Fitness& Health on Twitter Is Obi Obadike