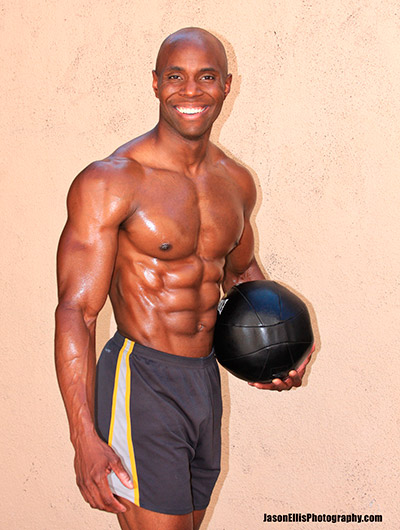 Obi Obadike is a Telly award winning TV host who has authored more than 100 articles for fitness magazines and fitness sites. He is a best-selling author of the diet and exercise book TheCut in which he co-authored with Hollywood Actor Morris Chestnut that came out April of 2017.   He has been a guest as an author and expert on national daytime talk shows such as Wendy Williams, Steve Harvey, Dr Oz, Rachael Ray, Access Hollywood, Home & Family, The Today Show, Roland Martin’s NewsOne Show, etc.

And many national syndicated radio shows. He was a featured fitness contributor on a summer-weight loss series in 2017 on NBC’s The Today show for 2 months.  And he worked with their resident nutritionist Joy Bauer on that show. Since August of 2017 he has been a health and wellness contributor on Steve Harvey’s national syndicated morning radio show. His show has a reach of 9 million listeners per week.

And he has graced the cover of over 50 domestic and international fitness magazines and has been featured more than 100 times in these magazines making him one of the most published fitness experts over the last ten years.

Obadike was the co-host and co-judge (with Jillian Michaels (formerly of Biggest Loser) and Randy Hetrick, (founder and CEO of TRX) on a fitness reality competition show called Sweat Inc. that premiered on Spike TV in fall of 2015.   He has trained and dieted some of the most influential celebrities and public figures in the world as well as many average regular people.  And he is known for his before and after transformations. Some of the notable celebrities he has trained is Steve Harvey, Morris Chestnut, ESPN Analyst Stephen A Smith

He has been the current co-host since 2014 for the last 3 years of an award winning nationally syndicated Health TV show called Lifestyle Magazine, which airs every week nationally on DirecTV and Dishnet and on some of the following national networks such as the Hope Channel, NRB, Sky Angel network and other nationally and local syndicated networks.

The show is aired in Europe, West Africa, South Africa, Canada, Australia, New Zealand and most international countries.  This health TV show is viewed by over 3 million people domestically each week.  In 2015 he and his co-hosting colleagues at Lifestyle Magazine won a bronze (Telly TV award) in the lifestyle programming category for a TV episode they did with Actor Kevin Sorbo called “True Strength”.  On March 27th, 2017 he won a Telly TV Award for the interview they did with Deniece Williams called “Life Choices”.

He and his cast also won a Remy TV award in 2014 and 2015 at the World Fest international TV and film festival. WorldFest Festival is the third competitive film festival in North America.

In January 2014, he was metrically recognized as one of the Top 10 most influential fitness experts on the Web by Dr. Oz’s Sharecare.com along with Jillian Michaels and Bob Harper from Biggest Loser and Dr Sanjay Gupta from CNN and others.  He was named Writer of the Year for the largest Internet site in the world in Bodybuilding.com in 2012. He had a very popular bi-monthly fat loss column on the bodybuilding.com site called Ask The Ripped Dude on that site from 2011 to 2014. Metrically it was one of the most popular fat loss columns on that site for that 3 year timeframe.

In 2013 he created and produced lifestyle exercise videos for Turner Broadcasting’s health and wellness entertainment digital brand called upwave. Those videos were bought out 2 years later by WebMD and they are now featured on their website.

In April of 2016 he was also named one of the Top Ten Most Inspirational fitness personalities by Ask Men.com which is the largest lifestyle men’s website online and some of the names that were on that list was Jack LaLalane, Arnold Schwarzenegger, Jillian Michaels along with other notable fitness names.  In August of 2016 Askmen.com named him one of the 50 fittest people of 2016 along with Michael Phelps, Connor Mcgregor, Usain Bolt and other mainstream athletes.

Obadike was a top Division I collegiate track athlete at Cal State Fullerton, where he was the school record holder in the 100 and 200 meters as well as the 400-meter relay. He was also co-athlete of the year at the university and a two-time All Big West Conference sprinter. He was the fastest guy in the history of the university.

He holds B.A/B.S and M.S degrees and is a certified nutritionist specialist and certified trainer with ISSA. He has been writer and contributor for fitness magazines and sites such as Muscle and Fitness, Bodybuilding.com, AskMen.com, Sharecare.com,  LiveStrong,  Shape, Oxygen and many others.

In February of 2017 he was named Senior Executive Director of Health and wellness for the ISSA- (International Sport Sciences Association) as well as an advisor to their presidential board. In January of 2018 he launched his own signature supplement brand called Obistrong with his business partners.

Some National Daytime Talk shows Obi has been featured in: